What do holidays have to do with cohousing?

Just before Easter, I managed to sneak a weeks away in the Pyrenees for some cycling and snowsheoing in the early spring sunshine.  I took a late afternoon Eurostar to Paris and then got the sleeper train right up into the mountains arriving in time for breakfast.  Returning, I left the charming small town of Foix at 9pm, had breakfast in Paris and was back in London for an early lunch.

The new Pendilino service which takes only 2.5 hours from Lancaster to Euston with Advance tickets from only £14 each way, and the relocation of international departures from Waterloo to St Pancras – 10 minutes walk from Euston – has made journeys from Lancaster involving Eurostar much more attractive.

The vast majority of journeys to southern France and Spain are made by air.  But interestingly, I discovered that four or five other Forgebank households had already made this trip by train since the Autumn.  Interesting enough to take a break from the building related blog posts to consider what is behind this?

From the point we set up Lancaster Cohousing we recognised that building energy efficient houses was only part of the eco-living picture.  A rough analysis of a UK resident’s carbon emissions shows that around a third are related to buildings, another third the things we buy (especially food) and the final third travel and transport.  Our desire to help reduce our travel impacts has directly influenced the project.  We searched long and hard for a site within easy walking distance of the city centre before settling for one a 15-20min flat cycle ride away.  We’ve designed the site to make cycle access and storage as easy as possible and have a residential travel plan which will do all the little things that make it easier not to have to drive.  Our car pool will provide access to vehicles for people who need them, without the hassle and fixed expenses of private vehicle ownership.  Transport has influenced our choice of building materials too.  For example the blocks our houses a built with are made from recycled aggregates in the next village.

The decisions we all make about longer distance travel have one of the biggest impacts of all on our carbon footprints.  But it is hard to see how these longer journeys have anything to do with how we build houses.  As a group of people we all seem to be very interested in the world, and most of us do fly from time to time.  But it is becoming clear that the community we are creating is helping us to address these impacts too.  Catching the train to Spain is so unusual that it wouldn’t occur to a lot of people that they could do it.  And if it did, they wouldn’t know where to start buying a ticket (especially getting one at a sensible cost).  But coming together has enabled us to share all those experiences.  Talking to someone who has done something already makes the prospect of doing sound so much more straightforward.

As we all move into our houses I’ll be looking forward to learning from my new neighbours about new ways of reducing my impact on the planet, and also about what things are over-hyped, and when you look into them really aren’t worth worrying about.  YES – I DO want a plastic carrier bag – I use them to put my muddy shoes in!

What makes completion dates so hard to predict?

Our build is managed to a programme, looking like an extended version of the now out of date extract below. This sets out what needs to happen when if homes are to be completed as quickly as is reasonably possible.

Inevitably things always take a bit longer, despite our best efforts.  A complicated site and innovative design both make delays more likely, and today’s blog aims to shed some light on some of the main causes of these.

The programme had to be adjusted even before Whittle Construction, our main contractor, were able to start on site.  Firstly getting the formal planning approval took much longer than expected.  The application was passed by the City Council’s planning committee in July 2010, but we did not receive the formal decision letter we needed to get moving until November 2010.   A minor diversion to the public footpath was approved as part of the planning permission but the formal Public Path Diversion took until the following Spring.  Finally, negotiations with our funders over the wording of the contracts with our design team and contractor took far longer than anyone expected.  By the time we were in a position to get started we were embarking on substantial earthworks in the Autumn - the worst possible time of year.

Until recently the main cause of delays on site has been the weather.  Blocks cannot be laid in freezing conditions, and wet weather turns the sub soil we have been using to reconstruct the slope into slop.

With ever increasing numbers of trades on site we are seeing more examples of what are seemingly minor incidents leading to significant hold ups.  We were hoping Terrace A would be finished in June and now it is likely to be July.  The trouble started when a pallet of windows that had arrived in good time from Latvia, was found to contain just windows, not windows and doors as expected.  However both were needed in order to get the houses watertight and start the rendering and the indoor trades.  The latest delay has been due to detailed design of the ventilation system.  Whittles had been advised to allow one week for this and it ended up taking five.  I believe this delay is partly related to the delays getting started.  There had been two price increases for the ventilation equipment since Whittles priced the job, and understandably they had been shopping around for a more affordable alternative option before placing the order.

Terrace B has also been delayed.  This time a shortage of cavity trays is to blame.  The roof cannot be tiled until they are fitted.  This illustrates how an innovative project is more prone to delays.  Our cavity trays have to be made to order, whereas if we were building homes with standard levels of insulation they would be of normal width and readily available.

Progress on “building two” which contains the laundry, guest rooms, play room and toilets for the common house had been at a standstill because the roof supplier went bust.  Supplier insolvency is always a big risk, so let’s hope this is the only one on our job!

And just when we thought the winter weather was behind us, the roof trusses for Terrace C which were due to be craned in last week, got snowed in in Halifax.  The snow was soon cleared, but not before the hired crane had been sent back....  Of course if we had a bigger site with lots of storage space, we could have had the trusses on site well before we needed them.
The foundations have finally been started on Terrace D.  However the western end remains dependent on finishing off the facing of the reconstructed slope.  And that depends on.....

The good news is that despite all this, if we avoid any more major delays, we expect to have a steady stream of people moving in from Summer until Christmas, and the Common House should be ready soon after the first few people have moved in.


www.lancastercohousing.org.uk
Posted by Lancaster Cohousing at 2:42 PM No comments:

Email ThisBlogThis!Share to TwitterShare to FacebookShare to Pinterest
Labels: build

Serious about cohousing? A chance to look inside a PassivHaus 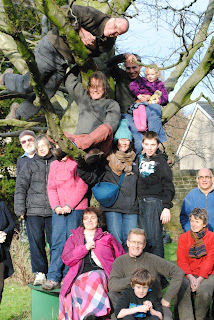 Join us for a one off chance to look around the inside of the almost completed houses (all current prospective members and new prospective purchasers welcome). We will be taking people on guided tours at pre-arranged time slots followed by refreshments at 'The Forge'.
If you are interested please contact us at marketing@forgebank.org.uk to arrange a time. Pre-booking is essential. 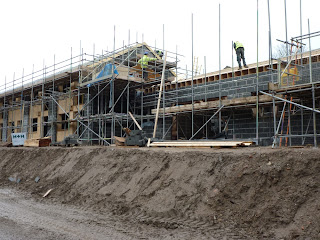 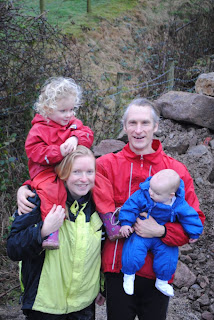 Our monthly opportunity for newcomers to meet with members.
11am Brunch at Whale Tail Café, 78a Penny Street, Lancaster, LA1 1XN.

We also regularly offer a tour of the site (though with restricted access as building is now underway) at 1.30 pm on brunch Sundays, including this special Site Visit Sunday. These are by request, and start from the Mill building, Mill Lane, Halton – follow the Whittle's signs (our building contractor) to get to the site. The following one will be Sunday 27 May. Please let us know if you are planning to attend: marketing@forgebank.org.uk or 01524 65808. 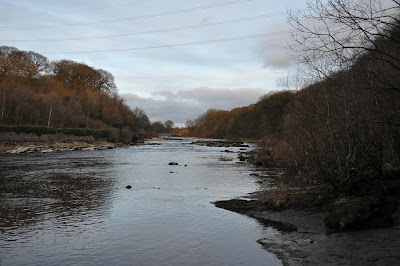 www.lancastercohousing.org.uk
Posted by Lancaster Cohousing at 2:38 PM No comments:

The combination of summery weather and lighter evenings enticed me into running to the site last week. I am really glad I did - it was a super golden evening.

Using the bottom path near the river, you are able to access the old Mill gardens and also obtain a good view of Terraces A & B.
The daffodils are in full bloom - as you can see! 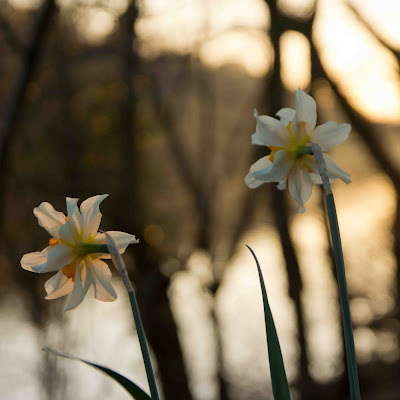 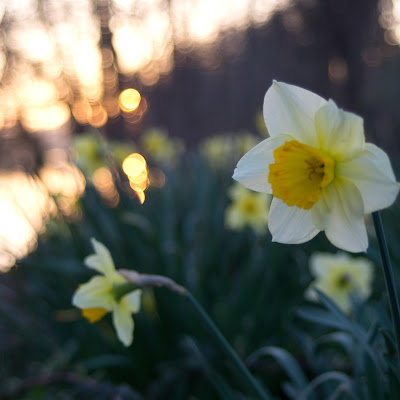 As the sun set I decided it was time to head home.

There is a country track called "Grimeshaw Lane" that takes you over a hill back to Lancaster. It is a lovely way to walk to Lancaster when it is dry and provides fantastic views of the bay and lakes beyond.