Well this is my first blog so I will keep it short and sweet:
Last weekend a number of us spent some time working on tidying up the site before the contractors take over. Our work supervisor was Pete and he soon had us clearing out flower beds, uprooting balsam, clearing out the mill and bagging up fly tipped rubbish. 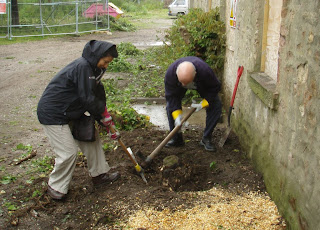 My work gang (which included Charles and  Judy seen above working hard) spent all day Saturday clearing out the flower beds in front of the mill, placing uprooted weeds on the cleared ground then covering the whole lot with heavy duty plastic. Pete assured us that in a couple of years time we would be able to uncover the plot and start planting.
The fruits of our labour can be seen in the next image which also includes foreman Pete clearing away our tools. 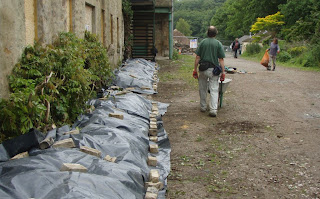 Email ThisBlogThis!Share to TwitterShare to FacebookShare to Pinterest
Labels: land

Our very own Dawn Keyse spoke to the Green Talk 2011 audience this month about Lancaster Cohousing's plans for zero carbon community living... check out her video below, or see the rest of the Green Talk programme of 'short talks, big ideas'. Fascinating stuff: we're in good company!

www.lancastercohousing.org.uk
Posted by Lancaster Cohousing at 11:04 PM No comments:

Email ThisBlogThis!Share to TwitterShare to FacebookShare to Pinterest
Labels: carbon

What's to be afraid of?

Miles and I were on our way to the June General Meeting this weekend when our train from Oxford to Birmingham was horribly (in both senses) delayed by a fatality on the line. We missed our connection at New Street, and ended up getting routed via Manchester, eventually arriving two hours late.

Which in the normal scheme of things would have been a bleak experience, but we found ourselves sitting at a table with a lovely woman called Justine, who got chatting with us. We said we were moving to Lancaster, and she said 'but why would you want to move from Oxford to Lancaster?'

So we started telling her about Lancaster Cohousing, and it turned out she had never heard of cohousing, but was really interested in it. She makes programmes for radio and TV, and is currently working on a drama about a couple who have a house full of things that they can't bear to part with. We were laughing about that, as our house is up for sale and we are trying to decide what to keep and what not to keep, and she did a quick impromptu audio interview with us about our struggles with pants and socks and leaves and twigs.

We kept talking, and then she interviewed us again about why we are making this big move. If you're interested in our reasons, what we're excited about and what we're worried about, you can listen to the recording. And thanks to @savvyjustine for asking the questions and turning a long boring journey into something much more fun. If there'd been a trolley service, we'd have bought you a drink!

www.lancastercohousing.org.uk
Posted by Lancaster Cohousing at 8:30 PM No comments: