I went with Luke to take photos of no. 8, the upstairs flat for sale a couple of days ago. It reminded me of our happy few days camping out there when we first moved to Forgebank and our house wasn’t quite ready. Some of Luke’s photos are great so I thought I’d share some of them and my memories of that time with you all. 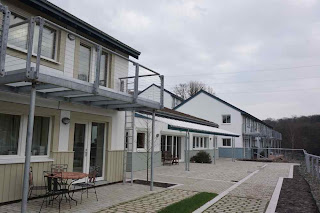 It’s a lovely space with great views and a full length balcony. It wasn’t ideal for a family of four in terms of getting sleep(!), but I’d recommend it to any couple or single person looking for a lovely private living space and community. It’s located at the end of terrace A next to the Common House and close to most of the communal facilities such as the guest bedrooms, bike shed, laundry and food stores. 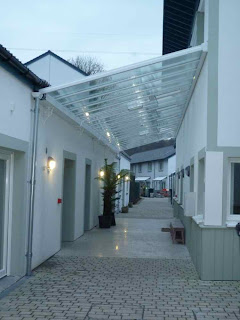 Here’s the view down the pedestrian street alongside the Common House from outside the 2 flats. 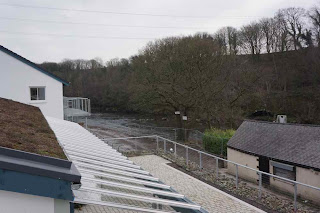 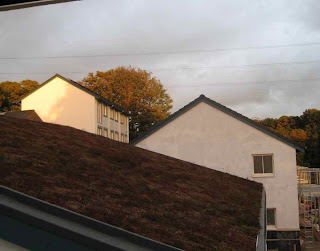 This is the view from the side window of the river, the common house terrace and the sedum roof. 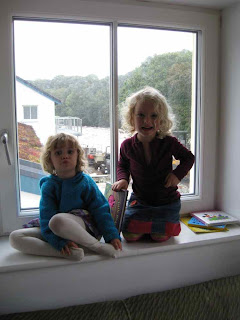 Back in September Polly and Martha loved sitting in that window watching the builders and their JCBs...

To the south you can see the other side of the river. While we were staying there the trees were gradually changing colour; at this time of year you can see the cyclists and walkers on the Millenium path in the distance. Of course from the balcony you get a 180 degree view of all this, how lovely!

Gill downstairs is lovely, the perfect neighbour, always calm and smiling. When I found myself with a just fallen asleep baby Isla amongst a flat full of bouncy older children I just carried her downstairs so she could enjoy her sleep in the peace and quiet of Gill's flat! We only heard some just discernible music once and apparently she was playing it very loud, and incredibly all she heard of our noisy family of four was Polly’s little footsteps occasionally when she ran around! 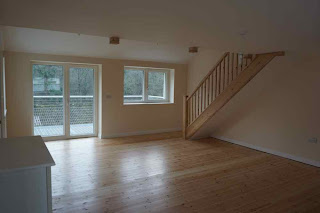 Last but not least some shots of inside the flat – how beautiful our homes are. The open plan downstairs area is very light and spacious. 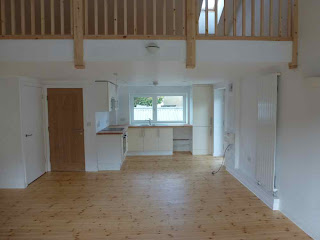 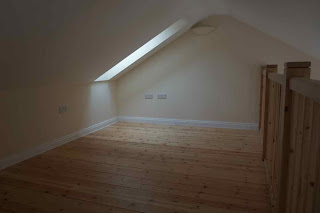 The mezzanine bedroom is a lovely shape with the sloping ceiling and there’s a very large ‘crawl in’ cupboard for storage which the children loved to play in when we were there.

The flat will be included in the tour 1.30pm this Sunday (27th January). Meet at the Common House, 9 Forgebank Walk, Halton, Lancaster LA2 6FD if you want to come along.

Email ThisBlogThis!Share to TwitterShare to FacebookShare to Pinterest
Labels: sales 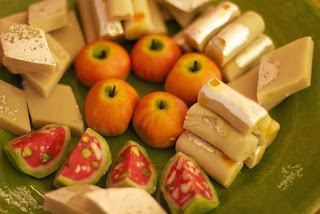 It’s just turned 2013 and we have just celebrated our first Cohousing Christmas, in fact we seem to have been celebrating for weeks.

Some people hate Christmas...all that family, materialism, jollity. Me I love it, but I live with someone who is not so keen (a bit bah humbug even), so it was great to have people around who love the build up as much as I do.

Everything became an opportunity to have fun and to do stuff ourselves - the talents that emerged were phenomenal. There was the evening spent decorating the Common House Christmas tree - we all got to bring our favourite decorations and watch the children have a ball (while having one ourselves). 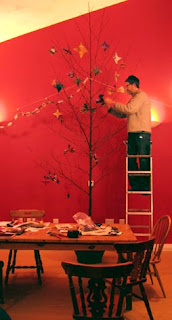 Kate, our resident artist, got us making things. She created some wreath bases out of willow, into which we twisted holly, ivy and pine cones. We used old magazines to make origami paper chains and decorations - birds and stars - to hang on an entire alder tree that miraculously appeared (Chris having cut it down during his path clearing endeavours, potted it and transported it into the Common House to complement the more traditional Christmas tree). It looked stunning. 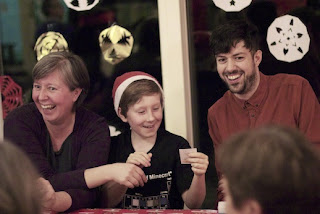 Then there was Pink Elephant, a sophisticated version of Secret Santa. We all brought along presents and had the chance to swap them for the presents other people had brought, so for once we could get the one we really wanted. I ended up with the promise of a loaf of freshly baked bread delivered to my door on the morning of my choice, but it could have been a mini bee hive, an outdoor thermometer or black salt. 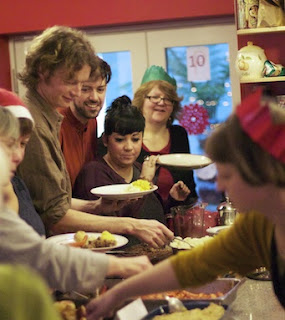 Sadly I was away from Lancaster for Christmas, heading off to London to be with my sons. But Kevin, my bah humbug partner, stayed at Forgebank and was joined by his son. Now you might think that, not liking Christmas, he would find all the cohousing celebrations too much: they seemed to spread over several days culminating with a “bring a dish” Christmas lunch for 30. The delicious Danish Christmas Pudding has already entered cohousing mythology, alongside Marinated Oranges and Mushrooms Wellington. 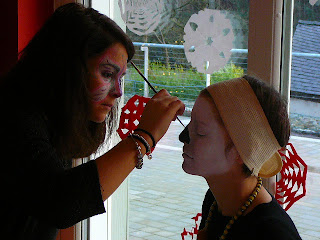 Kevin, a vegan who usually feels a resented afterthought at Christmas dinner (which may be part of the reason for his bah humbug tendencies) said it was the best one he had ever eaten - and he really, really cares about his food. He may even be coming round to the joys of Christmas.

I managed to get back to Lancaster for New Year’s Eve. When someone suggested a cohousing revue, some cringed, but enough of us were brave/foolhardy enough to give it a go. In the end it was an extraordinary show of talents: verbal, musical and comical. We have saved some of the rhymes and lyrics for posterity... 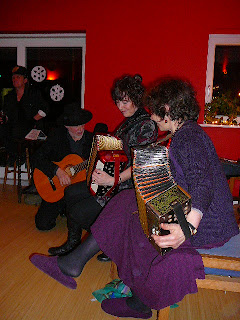 So the year ended with more good food, wine, company and entertainment. Hmmm...can we really keep this up in 2013? With another 15 households still to move in this year, I think perhaps we can.

Busman's holiday? A cohousing weekend away


One of the Lancaster Cohousing highlights of 2011 was when we came together at Arnside YHA for a weekend in December , to celebrate signing our formal agreements to lease. We took advantage of the YHA Winter Warmer offer, which is a great deal... those of us who weren't members already took out a group membership, and we pretty much took the place over for two nights.

A year on, many of us have moved in and we see each other all the time... but in October Lucy sent a message round saying that she and Huw and their family were going to spend a weekend at Arnside again in December, if anyone fancied joining them. And quite a few of us did! 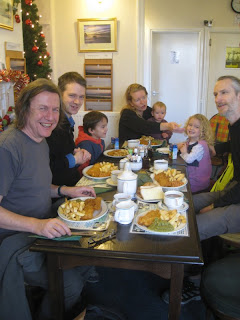 Eight of us set off by bike together to the train station, leaving plenty of time, which is advisable when you have chariots to detach and convert from bike mode to push mode, and a big bundle of bikes to lock up together on the station. There was also a last minute platform change, just to add to the fun.

It's well known that train journeys make you hungry, even short ones, so when we arrived in Arnside it seemed only right to head for the (excellent) fish and chip shop. Some had peas, some had beans, some had coffee, some had tea, some had juice, but we all enjoyed it very much indeed. 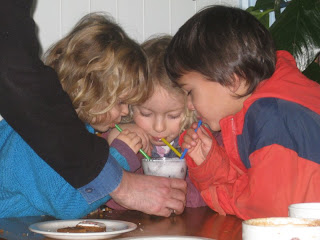 We were meandering rather slowly down the main street feeling a bit disappointed that the tide was so high that there was no beachcombing possible, when Kathy arrived -- with Polly & Isla in *their* chariot -- having cycled all the way from Forgebank. Clearly, this called for cake and hot chocolate, so we attended to that next.

This was all in preparation for walking up Arnside Knott, of course, which we did in two parties: the advance group, with the smaller walkers and their pie-carriers went first, while the others took our bags to the YHA then caught us up. We made it to the top before they reached us, which was very pleasing. 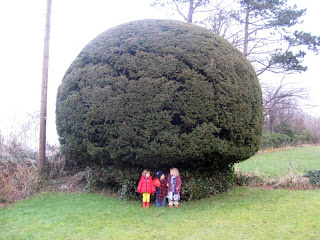 We admired the view, ate the pie (and some chocolate, and some Tic Tacs) and headed back down... some of us were getting a little tired now, and it was raining, so we did feel a bit gloomy when we reached the YHA to discover it was another hour till reception opened and there was no one around.

There was nothing else for it, we had to go to the pub. On the way there, we met Jon cycling up the hill, coming to join us after a run further up the coast. He didn't take much persuading to turn round and come with us to the Albion, where ale, mulled wine and more hot chocolate were enjoyed. 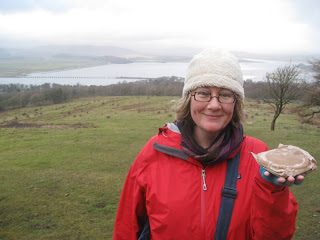 One thing that was interesting though was how aware I was of the draughty old building, and though I was perfectly warm enough in bed under my YHA duvet and blanket, how hard it was getting undressed in a chilly bedroom, so used am I to my nice warm eco-home. 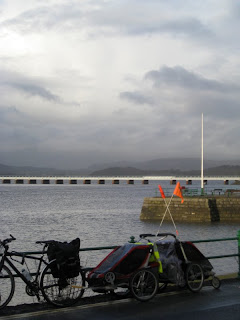 There was more eating and wandering on Sunday morning, where again we were lucky with the weather, and we did get a bit of beach action this time. We all got the train back together, which was quite hilarious -- two bikes, two chariots, five children, seven adults, more bags than we came with... but somehow we managed it, and found the rest of the bikes in Lancaster, and made our stately progress home. As a non-parent I had the luxury of an afternoon nap when we got back, it was definitely more hanging out with small children and less reading the paper than I normally do on a weekend, and I don't have the stamina! But I had a great time, and I look forward to more hostelly fun in 2013.

www.lancastercohousing.org.uk
Posted by Lancaster Cohousing at 11:53 PM No comments: