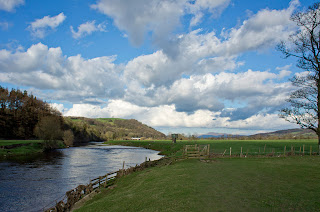 We took advantage of the gorgeous weather on Sunday to cycle out to the Crook O'Lune. This is a very popular spot for walkers, cyclists and bikers on a weekend, mainly I suspect because there is a cafe, but possibly due to Turners famous painting of "Ruskin's View".

The views and walks are fabulous, and it is only about 1 mile from Forge Bank, either along the cycle path on the opposite side of the river, or along a lovely bluebell wood, adjacent to our land. 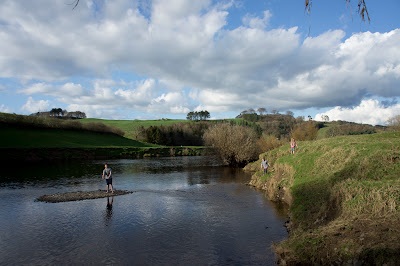 Naturally, the children were only interested in paddling in the water! 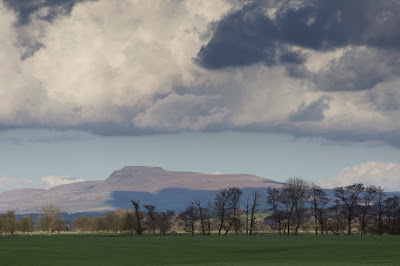 Whilst the children played, I walked further upstream and took in the views of Ingleborough in the distance, 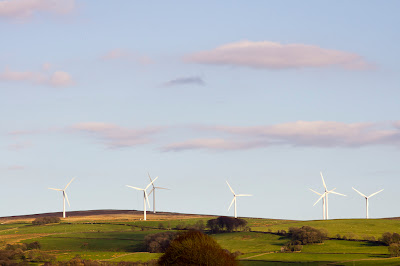 and the nearby wind farm on Caton Moor, which is an easily identifiable local landmark.

www.lancastercohousing.org.uk
Posted by Lancaster Cohousing at 10:18 PM No comments:

Email ThisBlogThis!Share to TwitterShare to FacebookShare to Pinterest
Labels: children


Another milestone has been achieved from our wish list. The really great thing about this milestone is that we didn't have to spend a penny and we didn't really have to break a sweat. Until last week anyone living at Halton and cycling into Lancaster who wanted to access the tow path either had to brave the main road as far as the canal bridge or get off at the aqueduct and carry their bike up about eighty steps from the river side cycle track. British Waterways has now built a ramp joining the cycle track (which passes our Cohousing development on the other side of the Lune and goes from Caton to the town centre) to the canal towpath. This gives another off road cycle/walking route with easy access to Freehold, the Gregson, Dukes, Town Hall, Whale Tail, White Cross and points South ie to the University. Dawn and I tried it out, there's quite a slope to it but we found it easy enough to cycle up without stopping. There is a bit of a temptation to whizz down at top speed so they have installed some of those zig zaggy fence chicanes to slow you down. The bank on the uphill side is bordered and secured with what looks like very environmentally friendly coir matting. On the downhill side the fence looks very sturdy and part of it is set on top of some very impressive gabions. A few trees had to be felled during construction but British Waterways have made sure that more have been planted to replace them, so not only is the ramp just perfect for our purposes, but very environmentally friendly to boot.
Pete

Moving from the Peak District to Lancaster to be part of cohousing has been momentous in many ways. One of the transformational leaps is the fact that I am now confident to get my pushbike out of hiding and cycle everywhere I feasibly can. Because Lancaster is such a bike friendly town I’m pretty much cycling everywhere and this has had a huge impact on my health and my attitude to life in general. The new ramp is further icing on my cake.
I passed another milestone yesterday by walking to work in the spring sunshine. We are renting in Halton for this interim build period and my homeopathic practice is at Dacrelands Natural Health Clinic at Skerton. It only took me 40 minutes to get there. So my choices have increased. I generally cycle or I could catch the bus. Now I have added walking to work to my repertoire and it’s only another half a mile to the centre of town. Rarely these days does the vehicle get an airing and I have cut my fuel bills down by at least half.
And we move into our house in August. Oh joy of joys!
Dawn
www.lancastercohousing.org.uk
Posted by Lancaster Cohousing at 3:33 PM 3 comments:

Email ThisBlogThis!Share to TwitterShare to FacebookShare to Pinterest
Labels: cycling


www.lancastercohousing.org.uk
Posted by Lancaster Cohousing at 6:31 PM No comments:

Email ThisBlogThis!Share to TwitterShare to FacebookShare to Pinterest
Labels: build

Its all about the roofs - and the orchard

Here are some photos of the Terrace A roof going on... first the blue liner, then the tiles are placed in handy piles, and finally on Wednesday 29th Feb it looked like the final tiles were being put in place. 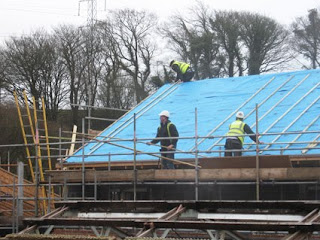 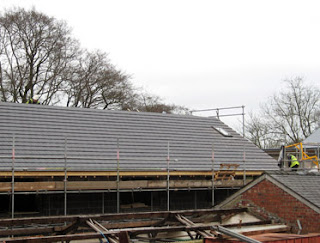 Meanwhile the solar panels are going on to the mill roof... 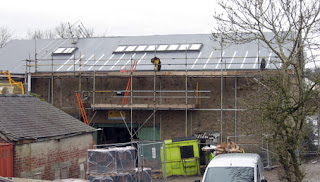 ... and Terrace F is rising above the ground at the upper carpark level, with one storey completed at ground level on the other side. 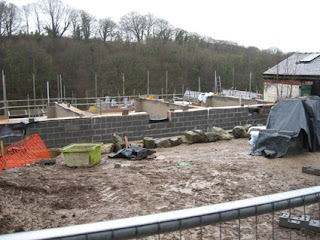 See the St Valentine's Day and St David's Day updates for much more detail on the build.

But while the contractors struggled with the weather, and walking about on site required boots against the deep mud, cohousers took the opportunity on a Sunday in February to work and socialise on site. 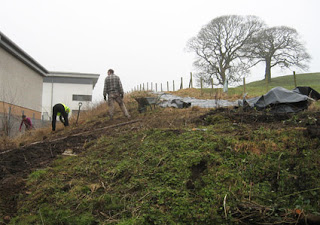 This area is a former piece of field that we are going to turn into a small orchard. The trees will not be planted until next autumn, but putting a weed suppressing barrier down now will make planting easier and give the trees a better chance. Our apple trees have been grafted locally at Middlewood Farm, and most are northern varieties. 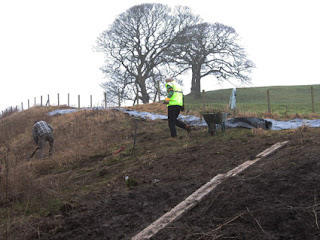 We used reclaimed bricks to hold the barrier down, but pushing a laden wheelbarrow of bricks up a steep plank is an acquired art, and some did not acquire it....

We also had to clear a few hawthorn bushes. Shifting the trunk of the largest took 2 people, but the smaller branches were cut up and used to create a windrow - a temporary shelter for small birds and animals, but which will gradually rot down and produce a mulch to be used around trees or hedges. 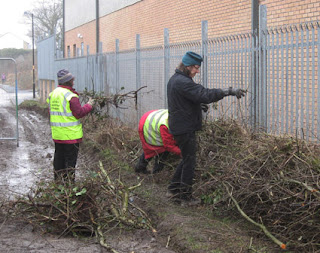 But in fact, although we do like to contribute towards our long term goals, these work sessions are also a great opportunity to get to know each other better, and having a break and a chat now and again is a very good idea.