Need yet more reasons to move to Halton? The local ‘Catch The Wind Festival’ on the beach at Morecambe could be one. Chris and I went to it on Sunday 24 June. Of course there are the kites themselves, from small to large, and from silly (I especially liked the swarm of multicoloured 45cm ladybirds which just hopped on the beach), to naturalistic (hovering kestrels), to clever formation displays mimicking (far more sustainably ) the Red Arrows.

If you don’t yet have a kite of your own, there is of course a stall ready to remedy that lack – so no excuses!

Add to that Morecambe’s very own marching band, Baybeat and their dancers, with the newly-restored, iconic art-deco Midland Hotel in the background.
Do you play brass or drums, or ever thought you might like to learn? Whatever your age or ability Baybeat would love to have you, and give you the opportunity to strut your stuff.


www.lancastercohousing.org.uk
Posted by Lancaster Cohousing at 9:32 PM No comments:

The Happening @ Halton - with a few of us immortalised in clay

Last weekend was The Happening @ Halton - a celebration at our soon-to-be local community centre to mark the official opening of its new state-of-the art skate park, Multi Use Games Area (MUGA), children’s play area and other facilities. The weather was fantastic, and a whole range of events, activities and competitions had the Centre buzzing all weekend.

Friday 8th July was the official opening of the facilities by David Morris MP. This included the formal unveiling of a beautiful pebble mosaic, created by local residents, including a few future Forge Bank cohousers, during a workshop with local artist Maggy Howarth back in February.

The mosaic illustrates the history of the River Lune and the people who have used it and occupied its banks over the ages, from Romans to current day. All of us who took part had a great time, and it's fantastic to see the end result in all its glory!

www.lancastercohousing.org.uk
Posted by Lancaster Cohousing at 11:32 PM No comments:

Email ThisBlogThis!Share to TwitterShare to FacebookShare to Pinterest
Labels: art, centre at halton

On Sunday 10 July, Ben Slinger, Halton's 'local hero', came to help us celebrate the start of our build with a fantastic on-site display of his trials skills. 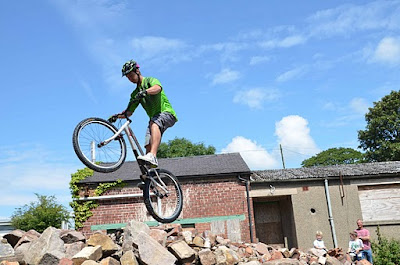 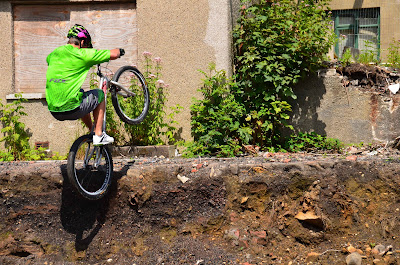 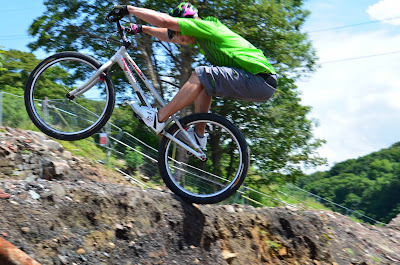 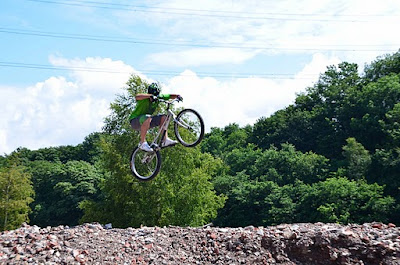 Ben, 20, is a member of the GB Cycling Team and a former International Trials Cycling Junior World Champion -- and no stranger to the Lancaster Cohousing site, as he has used the Lune river bank alongside the site for many years to practise his amazing bike skills, which include hopping up steps and boulders on one wheel, six foot jumps, and fantastic spins. His professional trials bike display team has featured at many events and shows and made TV appearances on Tour of Britain, Sky Sports, Blue Peter and BBC London news.

Ben said: "It's been great to watch the cohousing project over the years as it's come through the planning stages. It's very exciting to know that it is going to happen. I'm proud to be a groundbreaking Halton lad, performing all over the world, and I'm proud that this project has chosen my village for its groundbreaking eco-design - hopefully it will be another reason for Halton to be world-ranking!"

We'd like to thank Ben again for coming along, he gave us a whole different perspective on the site. Amazing. 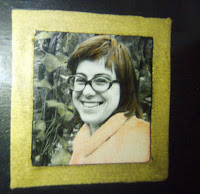 Last weekend 10 intrepid Forge Bank cohousers went along to the annual intentional community volleyball competition. Your Forge Bank team included: Chris, Mac, Maria Angeles, Fiona, Gill, Mark, Jon, Pete, Frances and Steve. The venue this year was Laurieston Hall, a long standing community dating back to 1974. If you want to know more about this fascinating community you could always quiz one of its early members seen here in a very fetching pair of designer glasses. 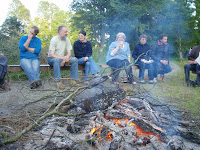 Laurieston Hall turned out to be a fantastic setting for a very chilled out weekend. The weather was stunning, the camp site idyllic and the company second to none. On Friday evening we were all welcomed with a communal meal, camp fire and a barrel of the local real ale. Team Forge Bank can be seen here keeping a close watch over the camp fire, an essential feature of any Scottish camping trip used to keep the midges at bay. 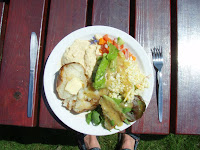 Our hosts laid on a superb array of meals and showed us all how easy it is to cater for 80 people at one sitting. Not only did the provide excellent main courses but we were also treated to home made bread, flapjack, biscuits and even ice cream using milk from their own cows. All this with such ease and efficiency, and at a cost of just £10 per head for the whole weekend. 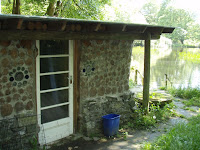 As well as eating visitors had the opportunity to wander around the grounds which included a small loch side beach used for swimming, boating and fishing, a two-acre walled kitchen garden, lots of wacky straw bale insulated caravans, fantastic oak woodland, pigs, cows and, the piece de resistance, a wood fuelled sauna (insulated with straw bales) The later feature came complete with a small lake used as a plunge pool and saw heavy use from the Forge Sauna team of Pete, Mac, Chris, Maria Angeles and Steve.
On the Sunday a few of us got involved in some hay baling, helping the community gather in hay from one of their fields. This turned out to be a great way to end the weekend. It was very satisfying collecting the bales and moving them into the barn, and a nice way to help to the Laurieston community. 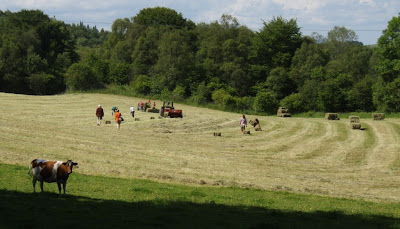 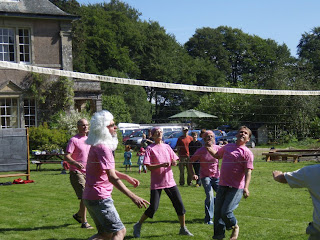 Oh I almost forgot - we did play some volleyball! Team Forge Bank managed to win two out of our four matches on Saturday. We did not make the semi finals on Sunday but came a credible 6th out of nine teams overall. Canon Frome snatched the trophy form the Brambles team in what was a very close final. However our team, some of whom had never played before, would have won the prize for the smartest team kit had there been one. Yes, it was very pink and yes, that is Mac dressed as a Wookie.
So if you think a volleyball weekend is all about playing volleyball, think again and sign up for next year's event. Finally I will leave you with an image of our top cheer-leading team doing what comes naturally...CHILLING OUT! 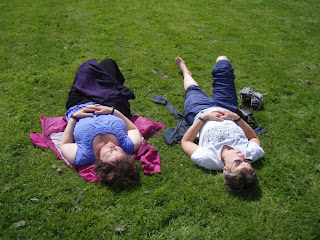 
www.lancastercohousing.org.uk
Posted by Lancaster Cohousing at 10:59 PM No comments: